It is a very simple image: Upon returning home to Croatia, after spending some time in America, the Croatian journalist Slavenka Drakulic noticed something she had never noticed before: In drskulic image, Ms.

Drakulic sees a metaphor for what is wrong with so much of post-Communist Eastern Europe, a metaphor for the failure of people to develop a sense cave individual responsibility and seize control of their lives, a failure she believes may ultimately affect these countries’ ability to become true working democracies with involved citizens.

What we need here is a revolution of self-perception. Not only will that not come automatically with the new political changes, but I am afraid that it will also take longer than any political or economic developments.

We need to accept our responsibilities towards both others and ourselves. Drakulic’s insightful new collection of essays, is studded with such everyday observations that open out, like windows, to reveal wide-angled historical vistas. The difficulty of buying a new vacuum cleaner becomes a lesson in the absurdities of Croatian bureaucracy and the resignation evinced by Croatian citizens.

A glimpse of a young man selling some bananas in an Albanian city prompts a meditation on post-Communist dreams of capitalist riches. And a question about a recipe for Bosnian sarma minced meat and seasoning wrapped in sauerkraut turns into a lament eyropa the shattered dream of pluralism, destroyed by the war. Some of the essays in “Cafe Europa” — like a piece on Ms.

Drakulic’s father — are acutely personal; others — like a report on what would have been the 75th birthday of the late Romanian dictator Nicolae Ceausescu — are more reportorial. In all of them, however, the voice duropa conversational; the tone, impassioned; the point of drkulic, unabashedly subjective.

The book not only helps to illuminate the political and social problems facing much of Eastern Europe, but also sheds new light on the daily life of its residents, their emotional habits, fears and dreams. A central theme — which will be familiar to readers of Ms. Drakulic’s earlier books, “How We Survived Communism and Even Laughed” and “Balkan Express” — concerns the aftermath of Communism and the challenges of making the transition to democracy. Drakulic, it means learning to say “I” instead of “we,” to embrace the idea of individual responsibility, be it demanding higher standards of cleanliness in public toilets or protesting arbitrary government decisions.

It also means learning not to live in an eternal present: As a result, you don’t invest, build or save in the name of the future. You just grab what there is today, because it might not be there tomorrow.

Drakulic goes on, also helps explain why some Romanians actually mourn the death of Ceausescu and why royalists in Serbia, Bulgaria, Romania and Albania have “appeared in growing numbers and with visible aspirations. We need a daddy, somebody who will look after us, so that we don’t have to look after ourselves. Drakulic argues, the people of Eastern Europe must learn to stop treating history as “a washing machine,” in which historical guilt can be laundered and absolved. 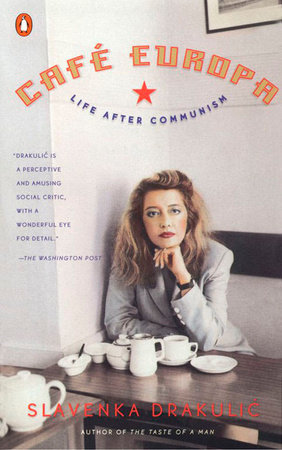 She observes that the new Government of Croatia has begun to erase its Communist past, while re-embracing the period of independence, without coming to terms with the fascist crimes committed during that era.

The Square of Victims of Fascism has been renamed the Square of Croatia’s Great Men, she reports, and a couple years ago the Commission for the Renaming of Streets even considered changing a square named after Tito to one named after the wartime pro-Nazi leader Ante Paveli.

Drakulic’s observations on what she sees as the Eastern European mindset, a mindset shaped by years of Communist rule. She contends that the paucity of smiles among shopkeepers stems from the tendency to see serving other people as an act of humiliation. She argues that the reluctance of consumers to invest in quality products stems from an inability to think about the future in any practical way. And she suggests that the eagerness of taxi drivers and hotel-keepers to rip off tourists with exorbitant rates stems from the desire to make money quickly to compensate for the deprivations of the Communist years and the belief that “there must be a trick” to getting rich.

For years, she adds, the residents of Eastern Europe dreamed about the West, dreamed about becoming a part of the Europe that enjoyed freedom and democracy and consumer goods. Drakulic, however, the failure of Western Europe to prevent or intervene in draiulic Bosnian war has demonstrated that the dream of Europe is just that: Because for us, the people from the Balkans, the biggest fear rrakulic to be left alone with each other.

We have learned better than others what you do to your own brother.